Back
Beaches and Nature
Azores: Island by Island 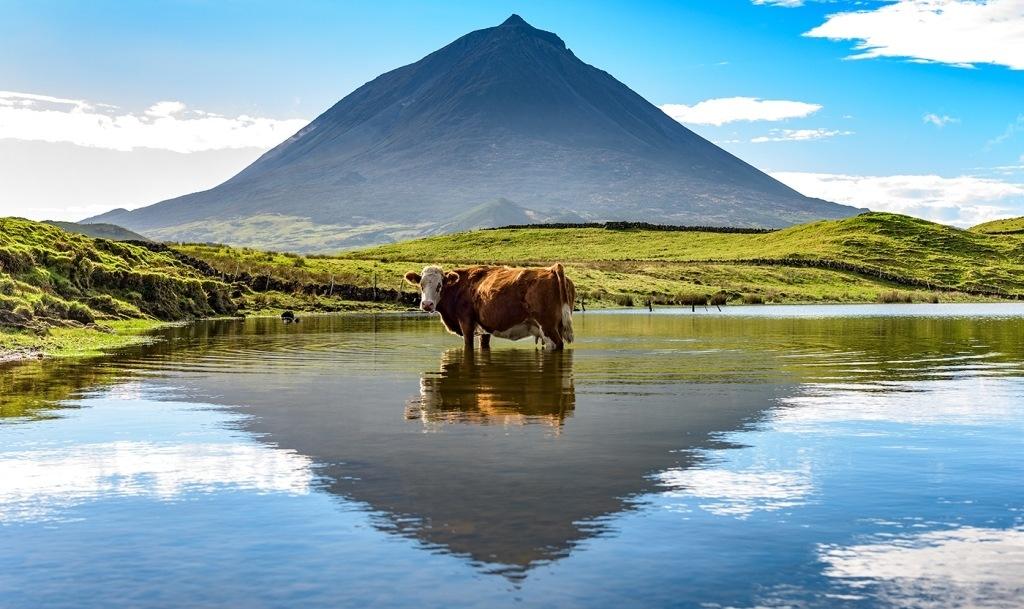 They are nine, and each one of them has its own personality, charm and atmosphere. Getting to know an Island of the Azorean archipelago always awakens the will of collect them all, so that one day we can safely tell which one is our favorite. So this is our warning: vacations in Azores can become a compulsion!
See flight + hotel

Here is where most of visitants start their journey, and for that reason we will start by this one too. São Miguel is the classical Island of Azores, since here you can find a lot of what turned this archipelago a popular destination: a neat historical center in Ponta Delgada, thermal springs as in the Terra Nostra Park or the Poça da Dona Beija, and breathtaking landscapes along the coast, with roads flanked by hydrangea. You can even find unique gems as the Sete Cidades lake and the tea plantations of Ribeira Grande. Add to this their fish, seafood and, of course, the famous Cozido das Furnas (a stew cooked in geysers), and you will never want to go back home again!

Have you asked for beaches? In the Azores, the Island with the most praised beaches, from Formosa's to São Lourenço's, is the Santa Maria's beach. White sand, protected coves, dramatic cliffs and space for everybody are some of its assets - adding to the fact of being one of the most sunny Islands of the archipelago. The wind may mean that you will have to shake your towel more often, but it also means that surf, windsurf and sailing are part of the menu. And if you like pastries make sure you taste local delicacies in your vacations: melindres, encanelados and ear cookies.

It's not that the third Island to be discovered in the Azores lacks natural beauty, but the truth is its crown jewel is the Angra do Heroísmo city. Walking through is cobbled streets or seeing it from the viewpoints of Alto da Memória or Monte Brasil (UNESCO's cultural heritage since 1983) is to make a journey to the 15th and 16th centuries, when the city was an imperative stopping place in the maritime routes to the new world. Even the Duque da Terceira's Garden, in the historical center, is stunning. 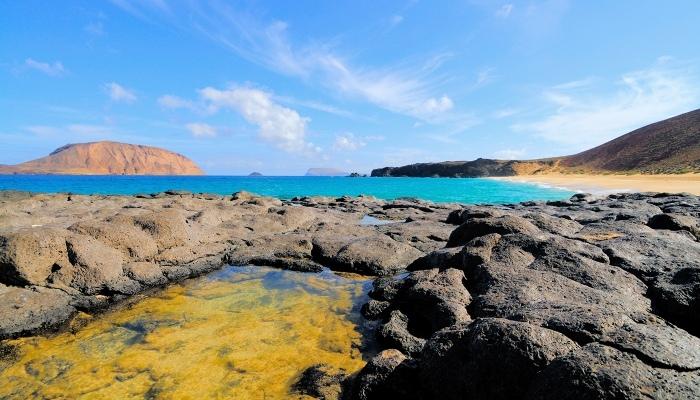 It's an Island of sea and volcanoes. The history of Graciosa is inextricably connected to the devastation that phylloxera has left in the vineyards of the Island, which led most of the inhabitants to move to Brazil and to the United States. It has been much more populated, this Azorean Island, but fortunately its qualities are attracting more visitants. Activities like diving, fishing, kayak, sail and windsurf are privileged in this pearl that equally owns very charming small beaches! 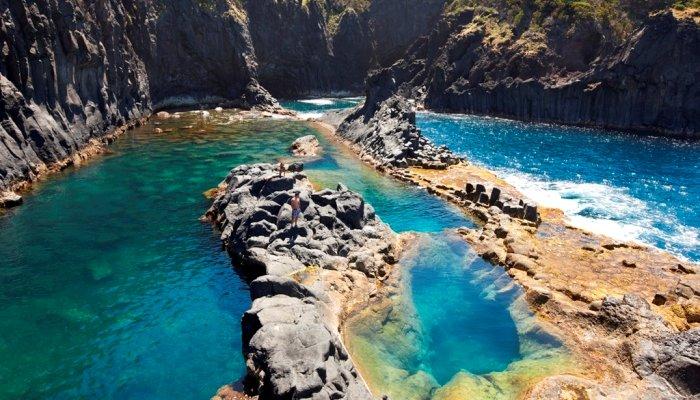 Nowadays, its name is practically synonym of its most famous export, the delicious cheese made in the Island. But did you know that it's in São Jorge the only coffee plantation in Europe? And that São Jorge is the only Island of the Azores where carpet shells are born and grow up naturally? If we add to this the local sweets - rosquilhas, coscorões and the coalhada cakes - the visit to this Island becomes an unique gastronomic experience. End it with a walk through the beautiful fajãs of the Island or with a good swim in the idyllic Poça Simão Dias!

It's maybe the most iconographic Island of Azores. As soon as we hear its name, we immediately see the elevation that rises up in the Atlantic Ocean, so many times surrounded by clouds. Reaching its peak is undoubtedly a recommended activity for your vacations in the Island. Despite the 6 to 9 hours-long walking, you will get to say that you have climbed the Portugal's highest mountain. To freshen up, in the return, nothing like a glass of the island's most famous product: its wine!

Whale watching and diving with dolphins are activities that you can find in several Azorean islands. But Faial, with its cultural component including the museum center in the old Whale Factory of Porto Pim, it's a privileged destination for those who want to know more about the history of the whale hunting, or for those who are interested in animal conservation and wishes to see them alive in their natural habitat. Yet it's mandatory to visit the Peter Café Sport, with the Scrimshaw Museum (wood carving and ivory paint, more precisely in whale teeth). Don't miss a visit to the Caldeira Natural Park! 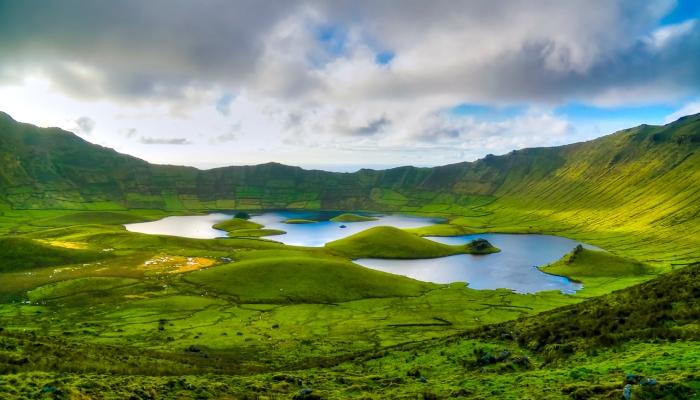 With less than 500 inhabitants, Corvo is the perfect Island for those who are sick of crowds! If you look for serenity and nature in your vacations this is your destiny, and if you are or want to be a bird watcher, know that here you find exceptional conditions: the registered number of occasional species is close to 400, adding to the 30 species that nest in the Azores archipelago. A walk by the Caldeirão Lake is something you will never forget in your life! 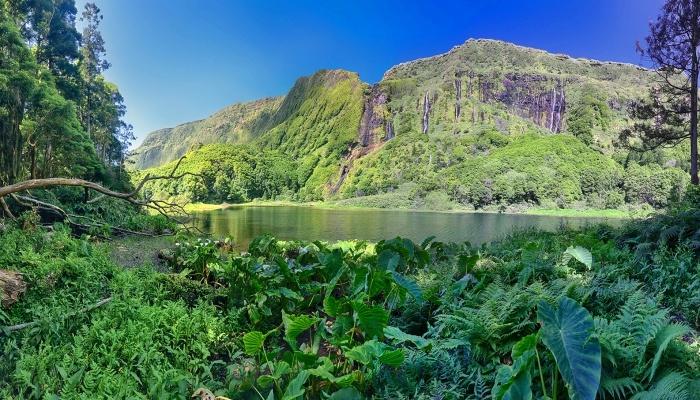 Comparing to Corvo's, the almost 3 thousand inhabitants of Flores seems a true crowd! But, in fact, the biggest island of the western group has a very low population density, and it's still an ideal destiny for those who wish to discover a place of untouched natural beauty and delicious gastronomy. Places like Poço da Alagoinha evoke a basically pre-historical time! And the Lagoa Funda sends us to other latitudes! As to diving, it's one of the privileged activities in the island: the debris of the Slavonia liner, sunken in 1909, is an amazing view!
Have we whetted your appetite? So start now planning your visit to Azores!
See more ideas from Beaches and Nature
Abreuexpress.com uses cookies to help improve your experience on the Internet. You can change your cookies settings at any time. By browsing on this website you are accepting their use.