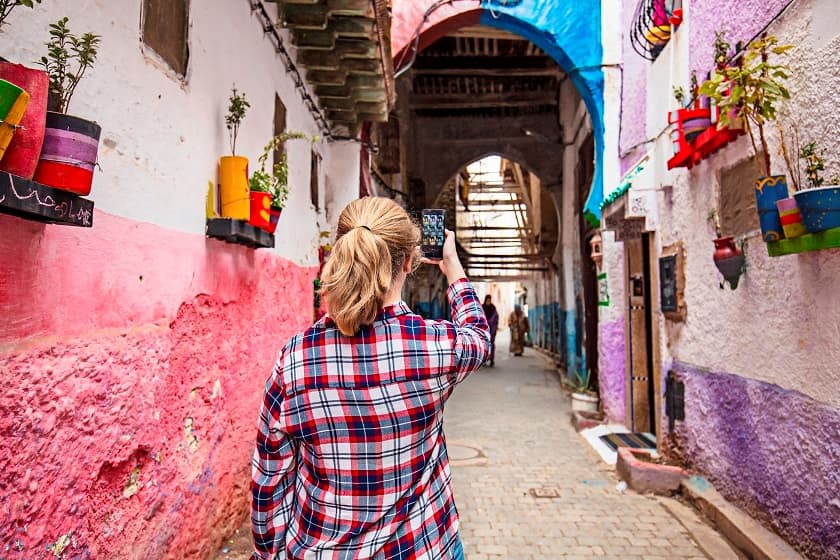 Morocco is a country of exotic colours and flavours, rich culture and diverse landscape, where the mountains of the Atlas and its snow-capped peaks contrast with the aridity of the Sahara, the imperial cities and the 1,835 km of beautiful beaches. Looking for an intense experience without having to cross the world? Morocco is the ideal destination. Discover 10 incredible places to visit!

The first of the imperial cities, Fez was, for 400 years, the capital of the kingdom of Morocco and the weight of history is felt. The medieval Fez has the largest and best preserved medina quarter in the Arab world and is an authentic time travel. Visit the Chouara dye shops, the silver workshops or the Jewish quarter, sip a mint tea in a riad and admire the city from the Merinid tombs. If you visit during the Festival of Sacred Music you will be able to attend concerts of great names of the most varied musical traditions of the planet in private spaces of exception. 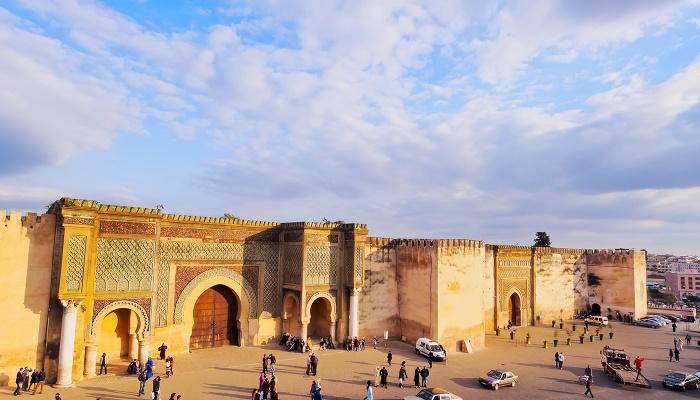 Like Fez (and still Marrakesh and Rabat), Meknès belongs to the group of the four imperial cities of Morocco. Situated on a plateau, the city was for the first time a capital city in the 17th century, and its inclusion on UNESCO's World Heritage list underscores the beauty of its architecture, bringing together Islamic and European influences. Bab al-Mansour is the postcard of Meknès, an imposing gate completed in 1732, now closed, but still an excellent pretext for an impressive photograph. The Dar el-Makhzen palace and the Dar Jamaï ethnographic museum, as well as its gardens, are also worth a visit.

The streets of Marrakech are confusing, chaotic, full of scents and exotic sights that constantly impel us to the next corner, in search of the next great surprise of the "Red City". The large Djemaa el-Fna square in the heart of the Medina produces an overwhelming impact with its crowd of vendors and multiple entrances to the market labyrinth. But, exploring the souk, we will find friendly craftsmen, specialized in the most diverse materials, from the woods to the copper, without forgetting the leather and the textiles. To find an oasis in the city peat, visit the Majorelle gardens or unwind in a Turkish bath! 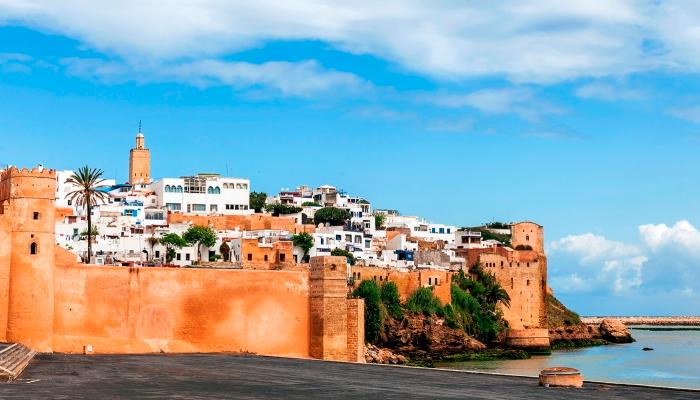 
Of the four imperial cities, Rabat has most recently taken on this role. Situated on the Atlantic coast, the kingdom capital of Morocco has a less hectic atmosphere than most major cities and is of special interest to history lovers. The Royal Palace, as well as the official residence of King Hassan II and seat of government, houses the largest museum in the country. The medieval citadel of Oudaias and its gardens of Andalusian influence, the medina quarter and the Roman ruins of Chellah are not to be missed when exploring the city of Rabat. 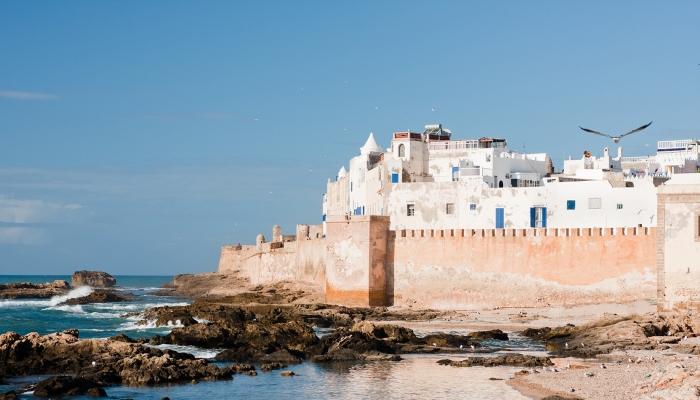 On the Atlantic coast, Essaouira was once called Mogador, and was taken by the Portuguese navigators, who built a fort there in the early 16th century. Much later, it was rediscovered by windsurfers, who still try to tame the trade wind. Essaouira is known for the Gnaoua Festival, which features composers and performers of World Music, inspired by the poetry, dance and traditional music of the Maghreb. This city, which serves as a meeting point for cultures and whose culmination was designated by UNESCO as an example of fortified architecture of the 18th century, will be the ideal base for those who want to discover the beaches of Morocco.

In the north of Morocco, in the Rife region, surrounded by springs, we find the "Blue City", which became famous for the incredible images it provides to photography lovers. Chefchaouen was founded with the purpose of protecting the zone of Portuguese incursions and ended up also attracting Jewish inhabitants, expelled from the Iberian Peninsula. It has an impressive religious heritage as a result of its mosques, but among travellers acquired fame for its houses painted in various shades of blue, relaxed atmosphere of its medina quarter and quality of its crafts, with emphasis on textiles and goat cheese! 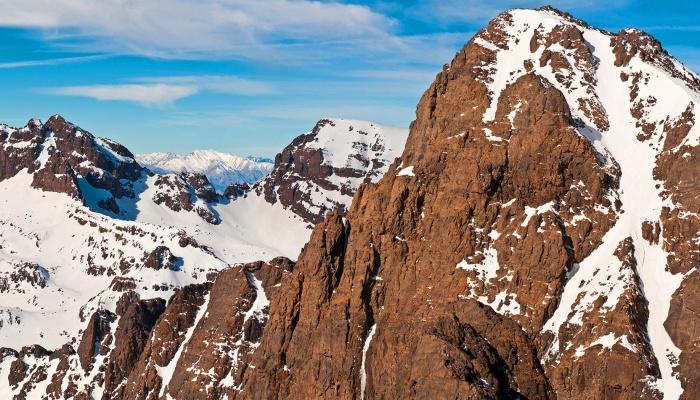 It is true that Morocco has an endless number of cities, each with its own special features, but we cannot ignore its natural beauties, full of contrasts. Located about 60 km south of Marrakech in the Toubkal National Park, the peak of Jbel Toubkal, at an altitude of 4,167 m, is the highest in the Atlas Mountains, the largest mountain range in North Africa. Even if you do not try a climb to the summit, the entire Toubkal mountain region is worth a visit, particularly if hiking and camping are on your list of favourite activities!

When we speak in Morocco, one of the images that soon springs to our memory is that of the Sahara desert, which here finds its western extremity. The most popular spot to catch a glimpse of this wonder of nature is Merzouga, a small Berber village, which sits next to the dunes of Erg Chebbi, the largest in the country and the rally point of the Paris Dakar Rally. Take a camel ride and spend an evening in the red dunes under the starlight for an unforgettable experience! 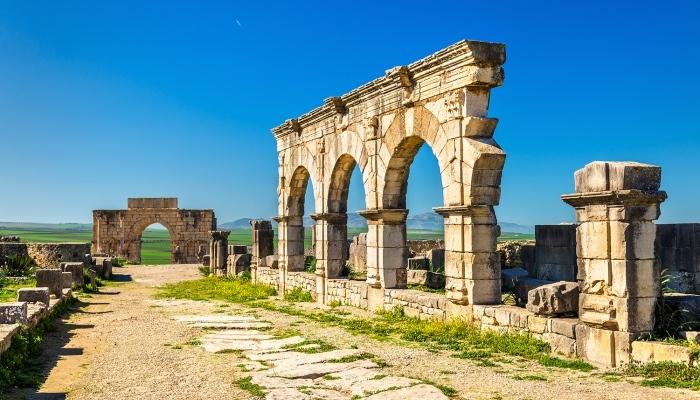 Close to the imperial city of Meknes, the ruins of Volubilis, which historians believe to have been the ancient capital of Roman Mauritania, it is an imposing vision. Despite the damage suffered in the earthquake of 1755, several important buildings can still be found: a basilica, the Capitoline temple, five other temples, dedicated to several deities and three public spa complexes. The mansions of the wealthiest inhabitants of the city still reveal beautiful mosaics today. Its state of preservation and its historical importance guaranteed it UNESCO World Heritage status and put it on the list of history-loving travellers! 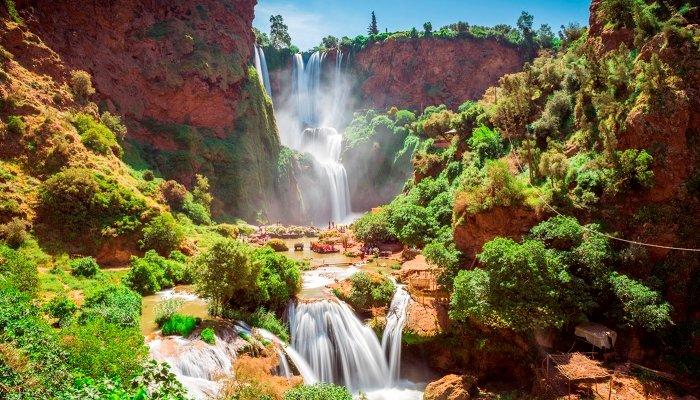 150 km away from Marrakesh, in the High Atlas National Park, stands one of the greatest attractions in terms of natural beauty in Morocco. We talk about the waterfalls of Ouzoud, stunning with its 110 m high! In the middle of a path lined with olive trees (the word ouzoud means olive, in the Berber language) we emerge in a setting of exceptional charm: the freshness of its swimming pools is ideal for the conclusion of a walk. And in this place will still find some nice and mischievous inhabitants, the Gibraltar monkeys. Watch out for the snack!
Have you checked alongside everything that captivated your imagination? So, now is to start planning your trip to Morocco!
See more ideas from Cities
Abreuexpress.com uses cookies to help improve your experience on the Internet. You can change your cookies settings at any time. By browsing on this website you are accepting their use.